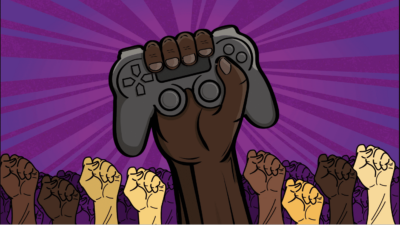 We here at TextNow HQ are big fans of games. Board games, card games, pen and paper role-playing games and, of course, video games.

The last part isn't too surprising, seeing as most people are into video games these days. Hence, the eye-popping  49.2 billion U.S. dollars in global revenue for the video game industry in 2021. Smartphones have made gaming nearly ubiquitous, introducing millions of people to the joys of Among Us, Candy Crush, and Pokemon Go.

This all makes it even more annoying that the contributions of black people to video games has been basically ignored, even though black creators, programmers, and artists have been around literally since the dawn of video games. So we thought we'd give them back some of the spotlight.

Lawson would be notable for a couple of reasons. He created one of the classic arcade games of the golden age of arcades, Demolition Derby, in his garage in 1975. But of greater historical significance, he was the "Godfather of the video game cartridge," and creator of the Fairchild Channel F, one of the very first home video game systems, released in 1976, beating the Atari 2600 home console to market by one year. As part of that system he created the concept of the game cartridge: Rather than have all the games programmed onto the motherboard, a cartridge allowed games to be plugged into the console separately, allowing for a much bigger library of games. It's a standard popularized by the Atari 2600 and Nintendo from the NES right through to the Switch. And without Jerry, it wouldn't have been possible.

In an odd reversal of the usual career path, Mike Pondsmith started in video games (as a graphic designer) before making a jump to pen and paper role playing games. And good thing for gamers, too, because Pondsmith is the author of the Cyberpunk role-playing game, now better known as the basis for the smash hit Cyberpunk 2077 video game that (full disclosure) I'm deeply obsessed with currently. Cyberpunk was one of the early role playing games that pushed RPGs (role playing games) out of the traditional high fantasy settings, incorporating elements of 80s cyberpunk fiction mixed with the visuals of Blade Runner and Streets of Fire, and themes of corporate oppression and transhumanism. It's still going strong today in fact, currently in its fourth edition, now called Cyberpunk Red.

But black creators weren't only active in the 70s and 80s. The explosion of indie game popularity, coupled with the accessibility of both tools and platforms, has opened the door to a much more diverse pool of game makers. Case in point: Shawn Alexander Allen. Having worked on some of the biggest blockbusters of all time (Grand Theft Auto IV, Grand Theft Auto V, Red Dead Redemption), Shawn went the indie route with Treachery in Beatdown City, a super clever take on classic 8-bit beat 'em ups with some new mechanics and systems that plays like a cross between River City Ransom and Fallout. He crowdfunded the game through a very successful Kickstarter campaign and released the game in 2020 to pretty much every platform. That kind of path wouldn't have been possible ten years ago.

Shawn represents just the tip of the iceberg when it comes to new black voices in the video game industry. As gaming grows, more and more space is made available for marginalized voices and new viewpoints.

That diversity is something TextNow proudly supports, both within our company, but also as part of our mission to bring phone service in an app to the world. It's also topic for discussion that shouldn't be confined to just one month a year.